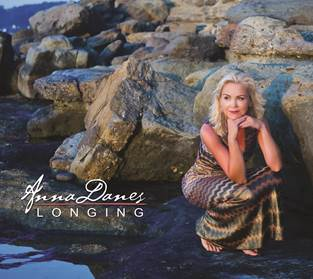 Debut album, “Longing,” from the vocalist who found refuge in song after running from Communism and a heartbreaking marriage, will be released March 25.

Solana Beach, Calif. (24 February 2014): As a child, Anna Danes escaped Communist Poland and as an adult, she found the strength to move on from an unhappy marriage. Both times, she found solace by singing. Love songs in particular soothed her dampened spirit while she idyllically longed for freedom and romance. Lacking support and encouragement for her artistic pursuits, Danes, armed with the Great American Songbook, found empowerment in a San Diego-area recording studio where she worked with producer Larry B. White, three-time Grammy-winning engineer-mixer Steve Churchyard and an ensemble of noted session players to record “Longing,” her debut album that will be released March 25 on DLG Recordings.

In the late 1970s, Danes fled Poland with her parents. After being turned away by Sweden, they immigrated to Ottawa, Canada where the young girl suddenly forced to learn English felt alone and isolated. She sang in a Polish church and it brought a sense of comfort and belonging. Flash forward: after giving up a successful law practice to move to California to be with her future husband, Danes found herself in a marriage that had lost its shine and stifled her creative endeavors. As her self-confidence began to wane, she rediscovered singing and started to come alive. The recording project was liberating and a life-altering experience, but in order to fully embrace the freedom she found in song, she had to dissolve the relationship for good. Perhaps the most emotionally-charged performance on “Longing” appears on the disc’s closing number, “I Wish You Love.” While recording the poignant farewell, tears streamed down Danes’ face as she sang, symbolically saying goodbye while wishing her now ex-husband love.

“Recording the album was monumental for my re-birth. I was so lost, living in a lonely marriage where ‘something was missing,’ but I am back now thanks to the music. Singing revived me and brought hope back into my heart,” said Danes, whose classic vocal timbre possesses warmth, fullness, familiarity and charm delivered in an easy manner with conversational phrasing. “I chose each and every song (for the album) that fit my style and voice, but subconsciously they show that I was missing love. I was ‘lost and lonely’ like (Antonio Carlos) Jobim says in ‘Quiet Nights of Quiet Stars Corcovado,’ which I recorded for the album.”

With the sad days behind her, a radiant Danes appears glowingly on the cover of “Longing” gazing out at sea with a slight smile on her face. She is excited about the future again and what it may have in store. Living in North San Diego County with her young daughter, Danes exudes enthusiasm when discussing her unexpected new career as a jazz singer. She plans to continue singing – both on record and performing live – while keeping her heart open for love. For more information, please visit www.AnnaDanes.com.

“Splendor in the Grass”

“The Very Thought of You”

“It’s All Right With Me”

“Dream A Little Dream of Me”

“I Wish You Love”