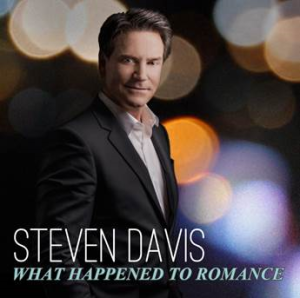 Nashville, Tennessee (23 April 2015): Bolstering the belief that romance is always en vogue, crooner Steven Davis plies his big voice backed by a big band on the swinging set “What Happened To Romance,” a charming meditation on love marrying timeless traits from another era to today’s passionate demand for originality. The 14-track disc comprised of a dozen original songs penned by Davis and The 88s’ Josh Charles and Alissa Moreno – the duo that produced the outing – will be released June 23 by the vocalist’s First Second Records and serviced to jazz radio for airplay.

The Nashville-based Davis trekked to New York City to record “What Happened To Romance” with The After Midnight Orchestra featuring original members of the Count Basie and Duke Ellington bands. Fully ensconced in the retro spirit, Davis belts out amorous overtures and enchanting dreams with debonair elegance amidst cascading melodies and groovy rhythms punctuated by the lush horns arranged and conducted by Andy Farber. Completing the collection are faithful interpretations of Johnny Mercer’s swooning “Day In, Day Out” and Irving Berlin’s rousing “All By Myself.”

The album’s playful escapade “Perfectly Perfect” is the sublime soundtrack to a television commercial for Centralway Numbrs, a mobile banking application in Germany and is viewable online globally (http://bit.ly/1bhhEZQ).

“We are using the template of the Great American Songbook writers to create new music that hopefully will stand the test of time. I love this music because it allows us to tell these stories and I like the nuances of this style. There is a certain sense of altruism that appeals to me,” said Davis, who will introduce his throwback sound to new audiences by playing unexpected places for a big band jazz singer such as a June 19 gig at the popular singer-songwriters’ haunt Molly Malone’s Irish Pub in Los Angeles. “Maybe I’m old fashioned when it comes to romance, but it will always be there even though the world has changed so much and is so different now. What happened to romance? It’s the same question we keep asking ourselves. The answer is different for each one of us.”

The charismatic Davis was invited to perform at the prestigious I Create Music ASCAP Expo in Los Angeles on May 1 and at the Durango Songwriters Film/TV Expo on May 15 in Ventura, California.

The songs contained on “What Happened To Romance” are:

“You’re Gonna Fall In Love With Me”

“What Happened To Romance”

“Let’s Keep It A Secret”

“If You Were Mine”

“If I Could Give You More”