Harpist Mariea Antoinette is gracefully leaving an indelible impression in smooth jazz. Classically trained on the harp, Mariea knew it was undeniably the instrument for her at the age of twelve. She has been playing for over thirty years and has always wanted to take her playing into a different stratosphere. “Straight From The Harp” bolsters a smooth fusion of jazz, funk, and R&B, blazing a new trail for herself and those to come after her. The journey has definitely been the reward for Mariea. Her concept for “Straight From The Harp” came from wanting to introduce a fresh, unique sound that could be heard in a different way. Mariea enlisted producer Allan Phillips to help bring her vision to life. The special edition of the Billboard Top 5 album will be released on September 25, 2015. Also joining Mariea on the album is violinist Karen Briggs who adds her twist to the first single, “Walk the Walk.” Mariea’s parting words of wisdom were: “practice compassion.”
Listen as Mariea and I talk history, music, and more: 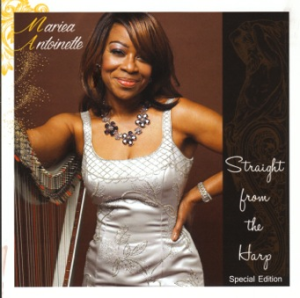