For parents, rebellion is not what we want to see in our children. However, we will experience it at some point. For Buddy Ebsen, his daughter, Kiki’s venture into rebellion would ultimately lead her into a future full of musical success. Kiki Ebsen decided to ignore her father’s request to pursue a career as a jazz singer and instead, chose to find her own way, indulging in the pop music world. Her talents as a singer/songwriter were undeniable and proved to get better with time. A future in entertainment was Kiki’s destiny. After all, she grew up in the limelight of her father’s success as an actor. After he passed, Kiki began to reflect on the desires of her father and, eventually, fulfilled the desires of his heart. As an expression of love for her father, she honored him with the “Scarecrow Sessions.” It is precisely the type of project that would have made her father proud. Over the years, Kiki has been evolving as an artist and has found her voice. She recorded “Scarecrow Sessions” in her own time, in her own voice, and in her truth. Working with David Mann to produce this project helped shape it into a masterpiece of songs that everyone can relate to. Additionally–making this recording even more incredible–were musicians Chuck Loeb, Henry Hey, John Patitucci, and Clint de Ganon.

Kiki and I talk about “Scarecrow Sessions,” set for release on September 30th: 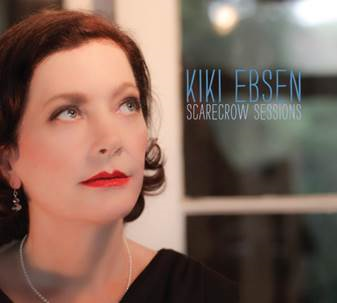 One thought on “KIKI EBSEN’S GIFT”