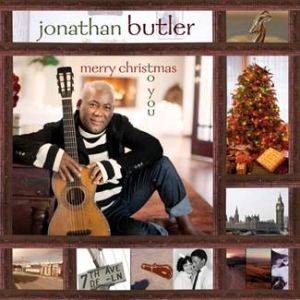 This Christmas will be a very special Christmas for Jonathan Butler

and embark upon the Dave Koz & Friends Christmas Tour this holiday season.

Sherman Oaks, Calif. (28 August 2013): Santa Claus has a special treat to stuff in the stockings of all the good Jonathan Butler fans this Christmas: the first Christmas album by the two-time Grammy-nominated singer-songwriter-guitarist. Butler produced and arranged “Merry Christmas To You,” which will be released October 1 by Artistry Music. Two singles will be shipped to multiple radio formats this holiday season: an instrumental take on “Sleigh Ride” decorated with hallmarks from the South African native’s homeland, and the album’s title track, which is a retro-flavored R&B/adult contemporary ballad penned by Butler.

Butler recorded eight Christmas chestnuts for the collection and penned a pair of new songs, including “Happy Holidays,” an ardent urban groove ornamented with riffs of cool jazz guitar. High-profile hornmen Dave Koz, Rick Braun and Paul “Shilts” Weimer contribute to the festivities on a couple of tracks as does Butler’s daughter, vocalist Jodie Butler, and bassist Dan Lutz, who plays upright on a tune, but the heart of the intimate recording is Butler solo pouring his impassioned voice and acoustic guitar into the seasonal songs. His arresting performances and sparse production captivates, fostering an air of freshness to the evergreen material.

“These songs are beautiful on their own so I felt they didn’t need a lot of instrumentation. Plus I wanted my fans to have a personal Christmas message from me. That is why the CD has very little production and plenty of voice and guitar. It’s a very proud moment for me to finally have a Christmas record, which has been a long time coming. I hope fans feel blessed and uplifted when they play it at home or in their car or wherever they may be. I truly thank God for giving me the strength and the opportunity to make this album,” said Butler, who lives in California’s San Fernando Valley with his family.

The “Merry Christmas To You” album opens with an energizing version of the Donny Hathaway soul classic “This Christmas.” Butler applies South African vocalization, chanting and rhythmic percussion to “Little Drummer Boy.” “I’ll Be Home For Christmas,” “Have Yourself A Merry Little Christmas,” “The First Noel,” “O Holy Night” and the lesser known “Sweet Little Jesus Boy” are presented starkly featuring show-stopping performances by the devoutly inspired man with his guitar.

Beginning November 30, Butler will venture out on a three-week U.S. concert swing performing on the Dave Koz & Friends Christmas Tour during which he will share the stage with the charismatic sax star as well as keyboardist Keiko Matsui and vocalist Oleta Adams.

A former child star, Butler was the first black artist played on radio stations in South Africa. The hint of grit in his expressive voice reflects the pain he endured growing up under Apartheid, the youngest of 17 children. A true artist who refuses to segregate his music, Butler’s recordings consist of vocal and instrumental hits and enduring fan favorites spanning R&B, contemporary jazz, gospel, adult contemporary, pop and world beat stylings. The natural-born performer’s radiant spirit shines brightly through his beaming smile and twinkling eyes. Additional information is available at http://www.JonathanButler.com.

The songs comprising Butler’s “Merry Christmas To You” are:

“Merry Christmas To You”

“I’ll Be Home For Christmas”

“Have Yourself A Merry Little Christmas”