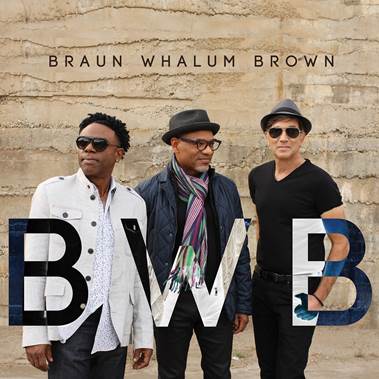 Super trio BWB is in the mood to party Memphis style

is the first set written by the hit-makers. Their Artistry Music debut arrives April 22.

SHERMAN OAKS, CALIF. (23 March 2016): You can almost smell the tangy barbecue sauce dripping from the forthcoming third album “BWB” by chart-topping trio BWB, who throw down like a sweaty garage band at a Memphis backyard house party on their debut for the Artistry Music label arriving April 22. It’s the first time the band made up of GRAMMY® winners Norman Brown (guitar, vocals) and Kirk Whalum (saxophone, flute, vocals) and Rick Braun (trumpet, flugelhorn, valve trombone, vocals) cooked up a festive, sticky-fingered feast of ten new contemporary jazz, R&B, soul and funk joints. Braun produced the session in his suburban Los Angeles-area home studio where the band moved in with their families and lived together for an entire week. The result is a collaborative disc celebrating brotherhood and live music. The tantalizing title track is the first radio cut, which enters Billboard’s Top 10 on next week’s singles chart and appears to be ticketed for the top spot.

Anytime the three solo stars get together to record, it’s an instant candidate for event album of the year in the contemporary jazz world. BWB has been itching to record original material ever since they first recorded as a high-wattage trio in 2002 when they released a collection of covers entitled “Groovin’.” Over a decade later, they reunited as a combo in 2013 with “Human Nature,” paying tribute to Michael Jackson’s songbook and scoring their first No 1 hit with “Shake Your Body (Down To The Ground).” This time around, they decided to compose the material entirely on their own, creating party jams specifically with their spirited live shows in mind.

As Braun tells it, “A long time ago in a faraway galaxy, three brothers dreamed of recording a CD of all original material as a band. Although the evil forces of time and geography stood in their way for many years, a dream is a powerful idea and ultimately the collective, creative force will prevail. And in that spirit, Norman and Kirk moved into my house for a short week with their loved ones. We played our horns, sang, drank wine, wrote, laughed and lived together. Thus it began!”

Primarily instrumental with a batch of tunes amped up by fun-filled vocal refrains and catchy, sing-a-long choruses, BWB’s members wove DNA from their hometowns into the music mix. With Whalum’s Memphis soul serving as the nucleus, Braun’s Philly funk atoms and Brown’s Kansas City jazz genes add flavor, flair and some old-school stank to the homegrown offering that struts and seduces with swagger and sophistication along with a devilish dash of mischief. An equally important nonmusical component is incorporating the enduring love and joy of treasured friendships that exists between the musicians.

“As I grow wiser, grayer and more awesomer (!), I realize just how important relationships are to me –– much more important even than music. But how awesome it is to make great music with great friends! This is a glorious bonus and a wonderful journey. I am grateful for “the Chord of three strands” that is BWB,” Whalum testified.

Brown concurred enthusiastically. “I believe in the Master Mind! Two or more minds joined in harmony with a common goal will surely connect to higher source energy. BWB is a brilliant vibration channeling a spirit of joyful elevation. I love my brothers!”

The songs contained on “BWB” are:

“I Want You Girl”