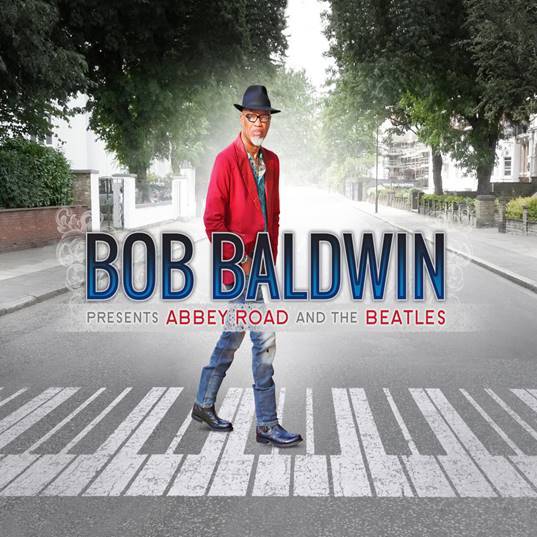 “Imagine” the Beatles in an urban-jazz context

The release of “Bob Baldwin presents Abbey Road and the Beatles” marks the pianist-keyboardist’s 30th anniversary as a recording artist. The first single, “Imagine (Living As One)” featuring Euge Groove, was shipped to radio.

ATLANTA (4 December 2018): Bob Baldwin was a kid listening to pop radio in the outskirts of New York City when he fell in love with the melodies of the Beatles. For his 25th album, the pianist-keyboardist embarks upon a magical mystery tour through the hit-filled pages of the legendary group’s storied songbook, plying his trademark urban-jazz sheen to the iconic harmonies. The Red River Entertainment release that dropped last Friday (November 30), “Bob Baldwin presents Abbey Road and the Beatles” was produced and arranged by Baldwin who wrote an original song in tribute to the band, “Abbey Road,” along with composing new passages that add unique elements to the eleven reimagined Beatles classics.

Having issued albums that honor the landmark works of Stevie Wonder, Michael Jackson and Thom Bell, Baldwin set his sights on the Fab Four’s influential catalogue that first captured his interest decades ago.

“My childhood listening tendencies before I was ten-years-old were quite broad, including Oscar Peterson, Miles Davis, the music of Motown and Aretha Franklin. On the pop side, the catchy hooks of the Beatles crept into my ear from days of listening to pop radio. For this project, I wanted to interject my own reharmonized view of the Beatles music while keeping the original melodies pure. Doing the Beatles was a different twist for me,” said Baldwin, who plays piano, keyboards, bass, drums, melodica, vocoder and plies his soothing tenor voice to the session. “It would be cool to know if Sir Paul McCartney could hear it, and more importantly, if he digs the attempt.”

The first single recently serviced to radio is a reading of John Lennon’s signature piece that Baldwin soulfully reinvents as “Imagine (Living As One)” and adds sweet soprano sax from Euge Groove. Other prominent soloists include vocalist CeCe Peniston on “(Don’t Wanna Be) The Fool on The Hill”; flutist Ragan Whiteside serenely illuminates “Michelle (My Girl)”; and noted jazz-R&B singer Lori Williams, who brings a nuanced grace and elegance to Paul & Linda McCartney’s “My Love.” Williams also charms on the Beatles salute that she wrote with Baldwin, “Abbey Road,” which the pair perform as a vocal duet. Songs like “Come Together (Can We All Just Get Along?),” “(Mellow) Yellow Submarine,” “And I Love Her,” “Yesterday” and “Eleanor Rigby” swing and groove like never before, rebuilt from the ground up on the back of Baldwin’s meticulous jazz and urban arrangements. Anchoring the rhythm section are drummer Tony Lewis and bassist Dave Anderson, who craft deep pockets seasoned with a smattering of percussion from Café Da Silva.

The arrival of “Bob Baldwin presents Abbey Road and the Beatles” coincides with Baldwin’s 30th anniversary as a solo recording artist. The 1988 release of “A Long Way To Go” was discovered by Roberta Flack, who was a finalist judge at the time for the Sony Innovators Award, a prestigious honor bestowed upon Baldwin. The debut album was the first entry in a library consisting of jazz, R&B and gospel discs, of which over a dozen have entered the Billboard Contemporary Jazz Top 20 sales chart. At radio, Baldwin’s track record boasts 15 Top 20 Billboard BDS hits, the most recent being this year’s “Be Blessed (No Stress).” He is the creative force behind The Groove Pact’s “Club Life,” a late summer smash from an all-star collective consisting of Baldwin, Marion Meadows, Marcus Anderson, Nils, Joey Sommerville, Oli Silk, Tom Browne, Whiteside and others. Enjoying a remarkably prolific period, Baldwin released seven full-length albums over the last twelve months.

Ten years ago, Baldwin launched his nationally-syndicated radio program, “The NewUrbanJazz Lounge,” which reaches over half-a-million listeners weekly with a mix of contemporary jazz influenced by urban and Brazilian music. A creative, Atlanta-based entrepreneur who leads a music production and event planning company, he authored “You Better Ask Somebody,” a 2012 book about his experiences in the music business. Baldwin, who also designs and markets a hat collection, has a patented invention that will soon be revealed.

“Come Together (Can We All Just Get Along?)”

“Something (In The Way She Moves)”

“Something (In The Way She Moves)” vocal version

The album is available for purchase at https://amzn.to/2rcgTLO. For more information, please visit www.BobBaldwin.com and www.NewUrbanJazz.com.