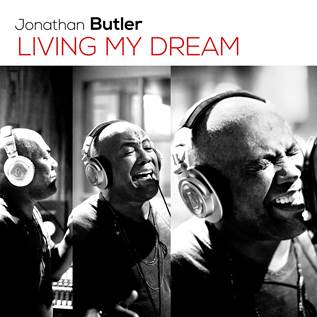 Rising above the struggles, Butler is living his dream

Family, friends – including Marcus Miller and the late George Duke – and an “African Breeze” combine forces on “Living My Dream,” coming June 24 from the R&B-jazz artist.

Sherman Oaks, Calif. (30 April 2014): It took a while for Jonathan Butler to feel comfortable saying it, but the South African singer-songwriter-guitarist’s confidence has grown as he celebrates what he calls “the season of me” and finally admitting that he is living his dream. He tells the story of his life and loves in the eleven original songs that “came from the heart” on his forthcoming Artistry Music album, “Living My Dream,” which will be released June 24.

Like Butler’s best material from a diverse, award-winning and chart-topping career that’s spanned R&B, jazz, pop and gospel, “Living My Dream” provides an honest and revealing soulful songbook probing the artist’s passions: God, family and his homeland. He has been taking care of others ever since he was seven years-old when he became a child star and was the first black artist played on white radio stations while growing up under Apartheid. Writing and producing gold-selling albums and international hit singles, the two-time Grammy-nominee’s entire life has unfolded in the public eye. Enduring recent struggles forced him to do a lot of reflection and ponder the type of man he wanted to be. He decided that he was finally in a place where it was time to celebrate his own extraordinary life and accomplishments.

With a much needed push from his daughter, singer-songwriter Jodie Butler, and guitarist-songwriter Dennis Dodd Jr., he wrote music every day before heading into the House of Blues recording studio in Los Angeles to record the material in a live setting “like records used to be made.” Bassist-songwriter-producer Marcus Miller co-wrote “Let There Be Light” with Butler and played on that track as well as on “Be Still,” which Butler wrote with George Duke during a 5-hour visit to the late legend’s wine cellar. Saxophonist Elan Trotman also appears on “Let There Be Light.”

“It’s one of those albums that I really didn’t think I had in me. I had been struggling, going through this emotional period. Last year was a transitional period. Once I got my wind and got back to a place of focus, it turned out to be the best experience for me. I had to be vulnerable to the songs,” said Butler about the essence of “Living My Dream.” “It’s the story of my life and the newness of discovery. These really are the best years of my life.”

Butler wrote or co-wrote ten songs for “Living My Dream,” which is a balanced blend of contemporary jazz instrumentals and R&B vocal tunes. The first radio single, “African Breeze,” is a reboot of an instrumental that he wrote 30 years ago for “The Jewel of the Nile” motion picture soundtrack. It is a brisk, energetic African-hued dancer on which Butler plucks the festive melody on nylon string guitar.

A captivating and impassioned performer, Butler will help launch “Living My Dream” during a summer concert tour at which he will share the spotlight with Grammy-winning guitarist Norman Brown.

Butler takes you into the recording studio and talks about recording “Living My Dream” in his EPK, which can be viewed at http://youtu.be/UFFmGWfsKkk. For more information, please visit www.JonathanButler.com.

“Let There Be Light”