June 21st at the Time Warner Cable Uptown Ampitheatre the line-up for a night a smooth jazz was stellar. The sky was blue and sun was bright. Local group 5th and York kicked the show off. Peter White and Euge Groove took to the stage and grooved us into the sunset. Peter played a couple of his songs as Euge grooved with him. Then the “House of Groove”, Euge that is, played his saxophone and drew the crowd in with hand clapping high energy. Peter and Euge complimented one another extremely well. Their chemistry was outstanding. They sent the crowd into a “chillaxin” mood perfectly indicative of the sun setting overhead. Night fell, darkness filled the sky, and the Charlotte sky line was beautifully lit up as Brian Culbertson graced the stage. He did so in classic Brian Culbertson style. He jammed with his new band from start to finish. His incredible vocalists Selina Albright and Jason Morales showed off their skills with duet’s and solo’s. WHEW!! The sound coming form the speakers kept the energy high and the crowd grooving. He slowed us down with “It’s On Tonight.” Then the unexpected as well as my favorite moment of the night happened. He took us down memory lane in Brian style and performed “Secret Garden.” It was for me the highlight of his show. He took his time and played his keyboard with pure passion.

June 22nd, night 2 under the sun, the moon, and the stars was jumpstarted by Gregg Karukas. He started the show off nice and easy. He opened with “Wild Wood” from his latest CD. Vincent Ingala joined him on stage and accompanied him on a few songs. Gregg’s working on his 12th CD. He played a few of the songs and asked the crowd to help him come up with a title. Guests were able to write down their suggestions and give them to him during the meet and greet session. That was pretty cool. Marion Meadows, Paul Taylor, and Vincent Ingala came to the stage playing 3 saxophones and heated things up a bit. They each shared music from their individual projects, and of course they jammed as a trio. Joe McBride wooed the crowd with his amazing vocals while playing the keyboard. During which, Vincent put his saxophone down and picked up a guitar and started playing. The entire band was electrifying and energizing. Ending the evening for us was Norman Brown, Kirk Whalum, and Rick Braun aka as BWB. What a combination they are. They grooved, they sang, and engaged the crowd from start to finish. Each artist played individually taking us down memory lane with some of their songs. When they began to play songs from their new release “Human Nature”, all everyone could do is sing along. That was quite amazing being that it was a couple of days away from the 4 year anniversary of Michael Jackson’s death. What a beautiful tribute to an unforgettable legend.

He’s known for his chart topping hits, his use of many instruments, and as a quadruple threat. Euge is a saxophonist, composer, producer, and DJ. He immerses himself into his music, and remains true to his art and his fans. He grew up listening to all types of music, and that exposure helped shaped the musician he is today. Euge knows what it feels like to be at the top of your craft, and have numerous chart topping #1 hits. Yet he stays grounded and focused on his calling in life. His longevity in the industry speaks volumes about his talent. His latest album titled “HOUSE OF GROOVE” was recorded in only eight months, and delivers some powerful vocals from Jeffrey Osborne, Chioma, and Kate Miner.

Let’s hear his story in his own words. 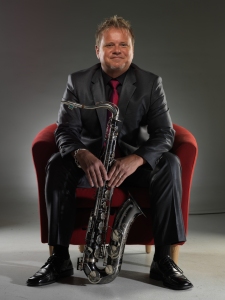